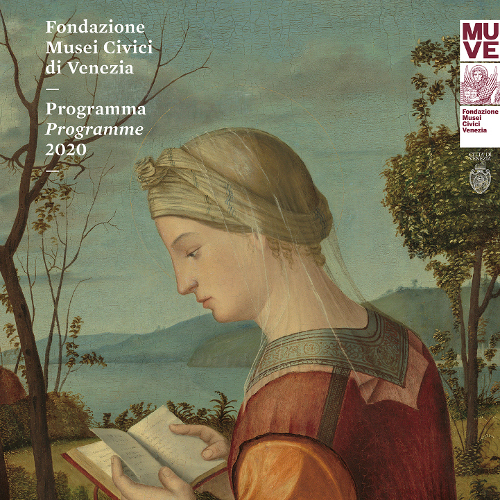 The year 2020 at the Fondazione Musei Civici is distinguished by the return to the lagoon of major Venetian painter Vittore Carpaccio (c. 1465 – c. 1525/26), whose work has been the subject of important discoveries and reinterpretations in recent years. He returns once again to Palazzo Ducale, after his last memorable exhibition in 1963, with a selection of paintings and drawings from important international museums (among others the Metropolitan Museum of New York, the British Museum of London, the Getty Museum of Los Angeles), as well as from various locations throughout the city and its territory. The exhibition will transfer in 2021 to the National Gallery of Art in Washington.

Chronologically, the first major exhibition of 2020, also at the Palazzo Ducale, is dedicated to melodrama, which emerged in Venice at the dawn of the seventeenth century, created by composers such as Claudio Monteverdi, the inventor of modern opera, and performed in venues such as the famous Teatro La Fenice. The exhibition is produced by the Victoria and Albert Museum in London and staged by the famous architect and scenographer Pier Luigi Pizzi. An affiliated exhibition on the mainland focuses on contemporary opera.

Another important exhibition this year, held at Ca’ Pesaro International Gallery of Modern Art, is the Foundation’s tribute to mark the eightieth birthday of Venetian artist Fabrizio Plessi. The golden age is a wide-ranging review of Plessi’s earlier and current work and includes a site-specific installation in the windows of Museo Correr in Piazza San Marco.

This year Museo Correr will also open the suite of apartments in the Palazzo Reale that were originally designed under Napoleon and reserved until 1866 for the Habsburgs, and afterwards, until 1920, for members of the House of Savoy. After a decade of work, the long enfilade of rooms overlooking the Royal Gardens re-emerges to surprise and delight Venetians and visitors alike. Palazzo Fortuny also re-opens after the restyling of its private rooms and arts atelier. From now on its collections can be permanently visited. At the Palazzo Ducale, the Quadreria will be inaugurated with masterpieces from the palace itself, together with a nucleus of prestigious works conserved long term on behalf of a private collection.

The Foundation will once again collaborate with MUVE Mestre at Forte Marghera, presenting a spectacular installation with an environmental theme, whereas Centro Culturale Candiani will hold the first of a series of projects on 20th-century art from the mainland, as well as the annual Premio Mestre di Pittura event and the innovative national competition for young artists entitled Artefici del nostro tempo.

International relations are further consolidated with MUVE Outdoor: Moscow will hold an exhibition dedicated to the splendours of 18th-century Venetian art, and a spectacular exhibition at the Sharjah Museum in the United Arab Emirates will focus on relations between the Venetian arts and Islam. Events conclude with the exhibition Kandinsky, Klee e l’arte astratta dalle collezioni di Ca’ Pesaro at the Monfalcone Galleria d’Arte Moderna. Mention should also be made of the Civic Museums’ numerous activities for schools and families managed by our Educational Services, a true vanguard in the field of inclusive knowledge sharing.

The past weeks has been marked by events that struck Venice and disturbed the world. The Fondazione Musei Civici di Venezia 2020 programme also represents a positive response to those days: an acknowledgement to the city that rises and relaunches itself, to its visitors and friends, and to the assistance they immediately offered. Venice and its Museums respond to such solidarity by sharing their beauty.