This tour takes the visitor into the most secret and fascinating rooms of the DOGE’S PALACE.

From the large and bright courtyard of Palazzo Ducale, rich in precious marble decorations, going through a narrow door on the ground floor, you’ll find yourself in the Pozzi (wells). They were terrible places of detention, consisting of small wet cells, barely lit by oil lamps, ventilated only through round holes in thick stone walls and closed in by locked doors with solid bolts.

A narrow staircase takes you up to the two small rooms that housed important officers of the institutional machinery: the Ducal Notary and the Deputato alla Segreta of the Council of Ten. From here one passes up to the Office of the Great Chancellor, head of what today would be known as the General Archive. This staircase leads to the large and beautiful Chamber of the Secret Chancellery, whose walls are lined with cabinets containing public and secret documents relating to the work of most of the Venetian magistrature. The mirrored upper doors are decorated with the coats-of-arms and names of the various chancellors appointed from 1268 onwards. Passing through the small room of the Regent to the Cancelleria one comes to the Torture Chamber. From the Torture Chamber you pass to the so-called Piombi. The name comes from the lead [piombo] covering on the roof. These cells of this area were used exclusively for prisoners of the Council of Ten – either those accused of political crimes, those awaiting sentence or those serving short prison terms. Though so vividly described by Giacomo Casanova, the Piombi did in fact offer prisoners much better conditions than those in the Pozzi (the wells). Both cells that were occupied by Casanova, now reconstructed, are part of the tour. From the Piombi you pass directly under the roof to the attic, with its attractive wooden trusses, located at the corner of the building between the waterfront and canal-side facades. This was the site of one of the corner towers of the much earlier castle occupied by the Doge. Exhibited here are numerous weapons “da botta” (blow” and “da taglio” (cut), crossbows, lances, Venetian and Ottoman, mostly of the 16th century as well as precious metal armatures, shields and gauntlets.

From this attic, two long flights of stairs take you to the Chamber of the Inquisitors, a much-feared magistratura that was set up in 1539 to protect state secrets (its full title was “Inquisitors of the propagation of the secrets of the State”). The ceiling of the room is decorated with works by Tintoretto, painted in 1566-1567. From here you pass through to the Chamber of the Three Head Magistrates, chosen every month amongst the members of the Council of Ten. The decoration of the ceiling dates from 1553-54. The octagonal central panel, representing The Victory of Virtue over Vice, is the work of Giambattista Zelotti, whilst the side compartments are by Giambattista Ponchino and Paolo Veronese.
In the Chamber of the Three Head Magistrates you may notice a secret passageway in a wooden cabinet, linked directly to the Chamber of the Council of Ten. 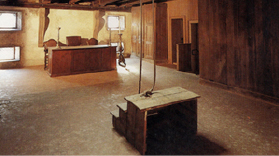 Not accessible with the standard ticket,  the tour is accompanied by a specialized guide, for a minimum of 2 people and a maximum of 25.

It starts at established times according to the following schedule: in Italian at 9.30 and 11.10; in English at 9.55 and 11.35; in French at 10.20 and 12.00. The Secret Itineraries Tour is also available after 1 pm (until the closing time of the Palace) with an additional payment of 31 euro per group, purchasing at least 15 tickets (service suspended from July 1st to August 31st). The tour takes about 1 hour and 15 minutes long.

The ticket includes the guided tour to the Secret Itineraries and grants access, without a guide, to the Doge’s Palace.

Accessibility: the Secret Itineraries tour is not accessible for people with mobility impairments or in wheelchairs. The visit is not recommended for pregnant women and children under 6 years old are not allowed.